Apple sold more than 10 million iPhones in three days. Half are missing in action. 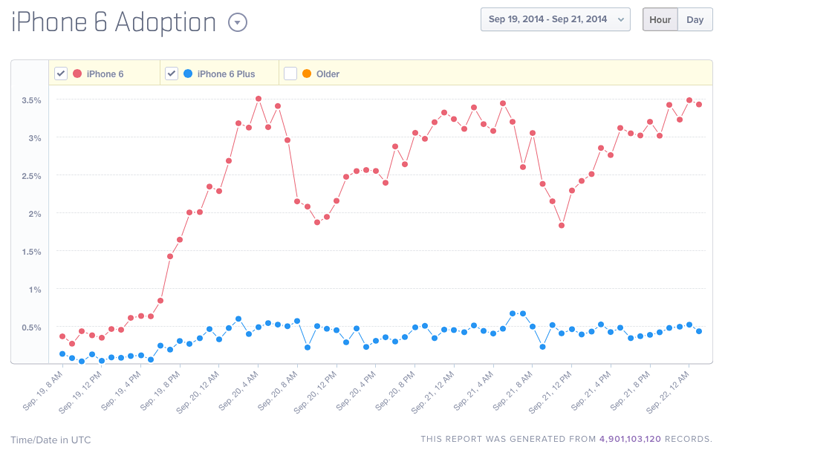 How were those sales split between the big iPhone 6 and the bigger (and more profitable) iPhone 6 Plus?

The company did not say. That’s information they’ll want to keep from their competitors.

We did get some third-party estimates over the weekend, but they came from different types of sources, and — curiously — they contradict each other.

The chart above happens be from the mobile analytics firm Mixpanel, but the ones put out by its competitors, Chitika and Fiksu, are not much different. They all show iPhone 6 activity (in-app purchases, etc.) over the first three days outpacing the iPhone 6 Plus by more than seven to one.

Yet a Piper Jaffray survey of 386 customers lined up Friday to buy iPhones in New York City and Minneapolis returned a very different result: More than half (57%) said they were in the queue to buy the iPhone 6 Plus. Only 43% were there for the iPhone 6.

The discrepancy is significant because the mix of phones will determine the average selling price of the device that accounts for more than half of Apple’s revenues.

What explains it? China.

Resellers buying for the Chinese market — where demand for Galaxy Note-size phones is strong and the new iPhones not yet available — dominated first-day Apple Store lines in the U.S., especially in cities like New York, where the Chinese American population, according the 2012 census, is 522,619.

On Saturday, one visitor estimated, 90% of the buyers at the Apple’s Soho store were Asians.

Here’s the thing: Even if those iPhones had already found their way to China and been activated, Fiksu and Mixpanel might not have counted them.

“Our map is zoomed in to show the US and Europe because the majority of Fiksu’s clients focus on user acquisition in those areas,” reads Fiksu’s fine print. “Our data on Asia-Pacific may not be representative.”

UPDATE: The ratio of Asian Americans in Soho dropped visibly Sunday after Chinese customs officials were reported to be confiscating grey market iPhones. Meanwhile a reader in Berlin writes that the lines there were dominated by Russians and Poles buying for resale in their respective home markets.