Apple Pay: What the analysts are saying 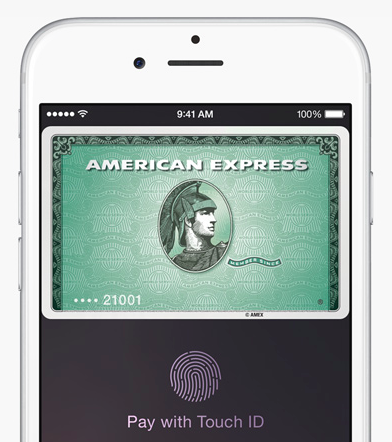 Gene Munster, Piper Jaffray: Apple exceeds expectations on payments. “We believe Apple Pay was the most important announcement from Apple’s 9/9 event and view Apple Pay as potentially the most important Internet service introduced by Apple since iTunes. Overall, we view the offering as significantly more built out than we previously expected in terms of the quality and number of partners as well as the level of integration into the iPhone. In the near-term, we believe the more obvious impact of Apple Pay is to drive incremental hardware sales in the iPhone 6. Longer-term, we believe that Apple intends to find specific ways to monetize each payment transaction on platform, which could be achieved through various efficiencies in the system. We expect investors to view Apple Pay as a reason why shares of AAPL could trade at a higher multiple given it represents the beginning of a potentially significant new bottom line driver for the business.” Overweight. $120.

Toni Sacconaghi, Bernstein: Our 4 Key Take-Aways. “Apple’s payment offering – Apple Pay – was likely better than most investors’ expectations. The capability appears secure, seamless and has traction and momentum with both retail and financial partners. Apple refused to confirm whether it will extract a commission/toll for its role as an intermediary – we suspect that it will, but believe that it could be minimal (SWAG of ~5 bp, pointing to potential revenues in the hundreds of millions, not billions) and note that rollout of POS terminals will likely take time. Additional opportunity exists in the online world – while competition is significant (Paypal, Google Wallet, Amazon, etc.), Apple’s control of the iOS ecosystem may allow it to create a very seamless payment capability for in-App purchases.” Outperform. $108.

Katy Huberty, Morgan Stanley: Apple Pay introduces new high margin services revenue stream. “Even before adding the new payments service, we believe Apple’s Online Services (iTunes + App Store) growth is accelerating and the business recently became accretive to corporate average margins. Apple Pay accelerates the trajectory of growth and profitability, which we expect to be reflected in multiple expansion near-term. Apple played up security (Touch ID, secure element) and privacy (cashiers don’t see your data, Apple doesn’t see or share your purchase behavior) of its payments platform – both key to signing up partners, in our view. In fact, Apple announced that major US banks (accounting for 83% of US transactions), several retailers (including Macy’s, Bloomingdale’s, CVS, McDonald’s, Whole Foods and others), and online companies (Groupon, Target, OpenTable, etc.) already plan to partner with and/or accept Apple Pay. While we conservatively estimate a ~$0.03 impact in year one, the opportunity increases 7x as more brick-and-mortar stores accept Apple Pay and as the company launches the service globally. The addressable market expands further if this system is able to shift more cash transactions to cards.” Overweight. $110.

Maynard Um, Wells Fargo: Thoughts On Apple Pay Announcement. “The announcement and detail provided today does not change our thinking that networks, issuers and acquirers will not be materially affected by the Apple Pay introduction. Regarding PayPal, it is not clear whether it will have any role in Apple Pay, especially for in­app purchases. Apple’s sizable smartphone market share, loyal users and iTunes card accounts could no doubt make it a significant player in the mobile wallet marketplace, potentially limiting the opportunity for PayPal (and others).” Market perform.

Steve Milunovich, USB: Apple Pay more secure but not a disruption of the payments system. “Apple Pay, only in the US, allows iPhone 5, 6, and Watch owners to pay by holding up their phones to a reader (NFC in phone) and holding a finger over TouchID. “Easy and secure” are the advantages over credit card purchases. Apple Pay is backed by the iTunes account card, so Apple is working on top of the traditional credit card infrastructure as we expected. Although financial terms were not disclosed, we don’t expect a substantial new revenue stream as much as differentiation of the ecosystem.” Buy. $115.

Rod Hall, J.P. Morgan: Apple Pay rolls out. “Apple Pay with both credit and debit card support: Apple’s payment service, Apple Pay, will launch in the US next month but will only be available initially on the iPhone6/6+ and eventually the iWatch given the NFC only nature of the service. We believe (though aren’t sure) that this is a proxy model only so will have little direct earnings impact. However, the fact that the service is only available on the new iPhones initially may increase replacement demand for those products.” Overweight. $112.

Aaron Rakers, Stifel: Mobile Payments (ApplePay) – Positive Ecosystem Expansion; Model Implications Unknown. Apple announced (expected) its mobile payment platform – Apple Pay, which we view as uniquely/positively integrated with Passbook and leveraging initial partnerships with American Express, MasterCard, and Visa, along with major banks currently accounting for ~83% of total credit card purchase volume. Leveraging NFC technology and Apple’s Touch ID security capabilities, we believe this represents a positive extension of Apple’s iOS ecosystem – albeit there was no info with regard to Apple’s monetization of this capability. Buy. $110.

Jim Suva, Citi: More Apps. “Apple Pay has already signed up major issuers that control 83% of the credit card payment transactions today in the US. Also 22,000 retailers have signed up. Key selling features of Apple Pay: One touch checkout, No need to enter card number/address once it is already loaded in Apple Pay and no card information shared with merchant. Also Apple made it clear they don’t store the transaction data. We believe Apple Pay will accelerate the timeline for mobile payment.” Buy. $110.

Jason Kupferberg, Jeffries: “Apple Pay” Announcement: Key Takeaways. “While there are unanswered questions around the economics of Apple Pay, our initial view is that Apple Pay could be neutral/positive for the networks and terminal makers, neutral/negative for the acquirers and issuers, and incrementally negative for EBAY/PayPal… Apple Pay will leverage TouchID/fingerprint technology to authorize transactions, and the company emphasized the relative speed/convenience of this one-touch payment method, which in and of itself may not be a sufficient value proposition to spark widespread consumer adoption. Apple said that they will not be capturing consumers’ purchase data, and surprisingly, made no mention of using its iBeacon solution (based on Bluetooth Low- Emmission, or BLE technology) to deliver targeted, actionable offers to consumers.”

Donald Fandetti, Citi Research: Apple Pay Introduced – Potential Winners / Losers. “What is somewhat new versus expectations is that Apple will not collect consumer transaction data, which some may view as less of a threat to the current ecosystem. However, there are arguably more merchants already lined up than anticipated. Apple Pay will also work via Apple Watch. We believe Apple Pay will accelerate the timeline for mobile payment in the US. While only about 20% of merchants accept NFC (tap & go), Apple’s move should tip the industry to upgrade point-of-sale terminals even more rapidly than plans around the pending EMV Chip introduction.”

Denée Carrington, Senior Analyst (digital wallets). “Apple Pay will ignite consumers’ interest in mobile payments by providing a seamless, secure, and easy way to pay both in store and on the go. By partnering with the leading merchants across retail, grocery, drugstore, and dining, consumers can use Apple Pay with merchants they shop every day — which will accelerate the growth of mobile payments in the US.”