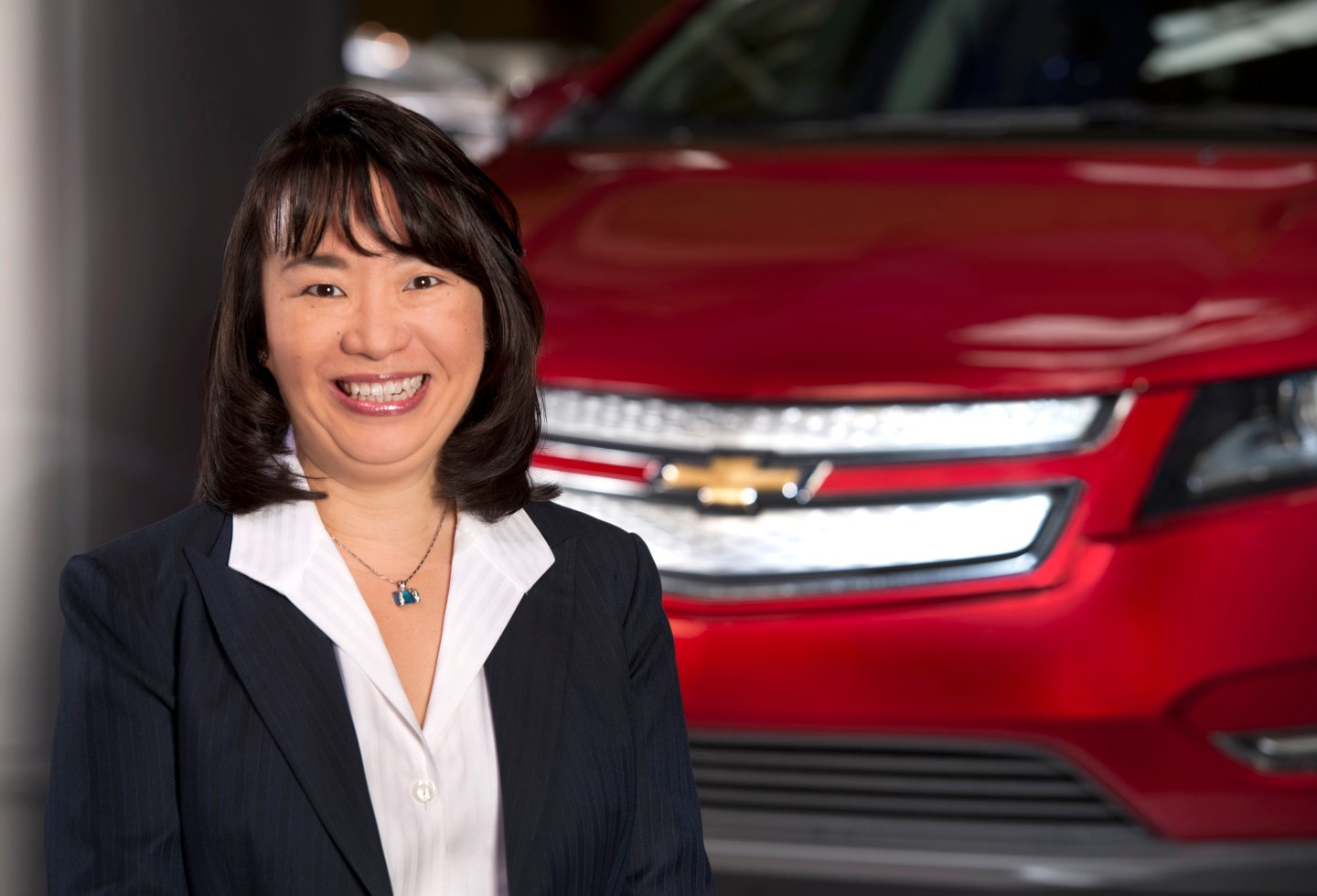 As General Motors fights to regain Americans’ trust after recalling millions of vehicles this year, Mary Chan may play an integral role.

Chan is GM’s global connected consumer president, and oversees the Detroit automaker’s (GM) efforts to keep drivers safe and secure through its subscription-based communication service OnStar. You are no doubt familiar with the feature: its signature blue button has been a fixture in GM vehicles since the mid-1990s. In years past, OnStar used the 2G wireless standard—advanced at the time, but slow by today’s standards; it’s the one your classic Nokia cell phone used—to allow drivers to communicate with its agents using voice and in the event of an emergency. This summer, GM began deploying its in-vehicle OnStar 4G LTE service, a move that brings to its cars the same always-on wireless connectivity that your Apple iPhone 5S or Samsung Galaxy S5 enjoys. Thanks to 4G’s ability to transmit more data in less time, it will also allow GM to turn its vehicles into their very own Wi-Fi hotspot.

By the end of the year GM plans to have more than 30 of its vehicles equipped with 4G technology. The feature will make it easier for GM to inform a driver about their vehicle’s operations more quickly and with much greater detail, but will also, with the help of additional sensors, equip the automaker with more data that it can use to detect problems it may have with vehicles out on the road, says Chan, who ran Dell’s wireless infrastructure business before coming to GM two years ago.

“Our cars are becoming a lot more sophisticated,” Chan told Fortune in an interview at the Classic Car Club in Manhattan. “With the broadband connection to the Internet, we are constantly pulling data out of the vehicle and its performance.”

Chan takes her iPhone out of her purse to show me what she means. After launching the OnStar mobile application, she reviews the tire pressure, gas level, and oil status of her car in Detroit. All happen to be fine, but if something were amiss she could, in theory, get the car fixed before returning to the road. GM drivers also receive a monthly email that includes more information about the vehicle’s engine, transmission air bag and emissions systems among other reports.

OnStar handles about 10,000 emergency service requests a month, GM says. The figure that could go down as drivers have a greater understanding about what is (and isn’t) going on with their car.

It remains unclear exactly how GM plans to use its advanced OnStar capabilities to prevent future vehicle recalls or accidents. 4G connectivity enables GM to run hundreds of diagnostic and maintenance checks on its vehicles, but any improvements to those tests remain in early testing. In the meantime, the automaker is using OnStar as a resource to help inform customers about the recall and answers questions. A company spokesperson declined to comment on how the system’s data could have informed GM about faulty parts.

GM’s chief executive, Mary Barra, has made it a company priority to connect its vehicles to the Internet. She’s been very “hands on” in the process, Chan says. Barra, once the head of global product development at GM, was one of the key senior leaders to endorse the company’s 4G LTE technology. In the aftermath of the recalls, she’s even more focused on how the technology can make GM vehicles safer, Chan adds.

“[She is] making sure that performance and safety is designed in across the entire company, in every aspect, and that it’s not just ‘Attach it at the end,’” Chan says. “[Barra] is very involved and really pushing that mission statement across the organization.”

Given all that it enables, GM hopes that Internet connectivity will become even more central to the car’s operations. Today, the company is focused on getting drivers connected to the Internet. In the future, it will likely turn its attention toward developing more sophisticated ways to use the data that the connection allows, Chan says.

“The whole vehicle space is one of just two areas that is not yet fully connected. The other area is when you’re on a plane,” Chan says. “We are really thinking about turning the vehicle into a connective platform. That is really exciting. [We are] creating a brand new device and platform.”

Sign up for Caroline Fairchild’s daily newsletter about the world’s most powerful women at getbroadsheet.com.