Chart of the day: Apple ramps up R&D spending 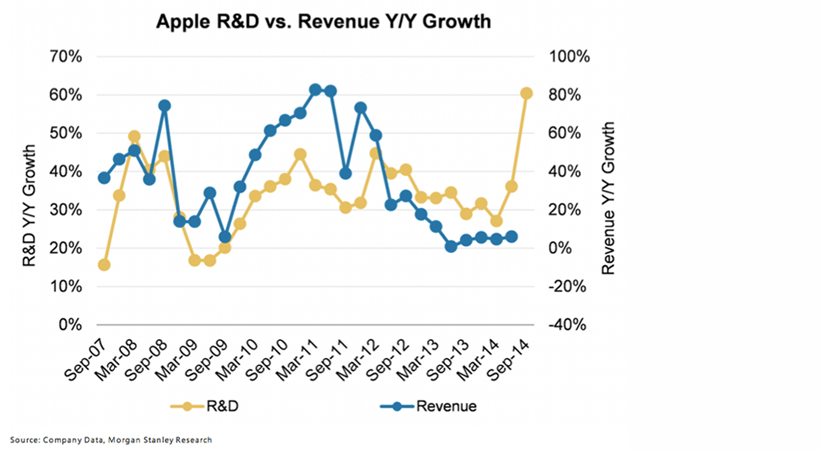 For a company its size, Apple invests relatively little on research and development. A European Union list of the 50 biggest R&D spenders in 2013 had VW, Samsung, Microsoft and Intel at the top and Apple near the bottom in 46th place.

But Apple gets a lot of bang for its research bucks; in the years covered by the attached chart it released the iPhone, the iPad, the new Mac Pro and a lot of software and services.

So when it increases R&D spending 36% year over year — as it did in the June quarter — Wall Street takes notice.

BTIG’s Walter Piecyk pointed out Tuesday that Apple’s R&D spending as a percent of revenue topped 4% in fiscal Q3, a level not reached since 2006, just before the launch of the original iPhone.

Morgan Stanley’s Katy Huberty goes further. In a note to clients Friday, she points out that Apple’s commitments for third-party manufacturing and component purchases rose 22% in Q3 to $15.4 billion while its commitments for product tooling and manufacturing process equipment, advertising, research and development, and Internet and telecommunications services grew 100% from the previous quarter to $5.6 billion.

“While some of the [R&D] increase is due to the Beats acquisition,” she writes, “we believe higher investment will broaden iOS features/uses beyond mobile devices, into the car, home, health, and retail.”

Huberty is particularly interested in that last category — retail. She takes as a given that Apple will release a device in October that she calls the iWatch, but she’s talking about something that sounds less like a timepiece than a credit card. She ends her note like this:

“News flow today suggests Apple may soon offer a mobile payments service. According to an unconfirmed report published by The Information on July 23, Apple is in discussion with Visa regarding a partnership. On July 24, Visa announced the creation of Visa Digital Solutions, which offers secure payments on mobile devices with a tokenization service to come in September. Based on NXP’s C3Q guidance, also on July 24, our analyst Craig Hettenbach estimates Emerging ID (the mobile payments segment) will grow over 50% Q/Q next quarter due to new product ramps with Apple… We believe such a platform could generate new revenue streams for Apple.”