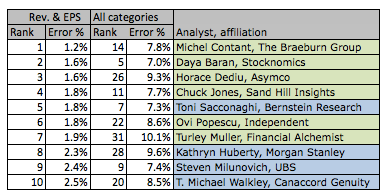 Although they took six of the seven top spots in this quarter’s Earnings Smackdown, fiscal Q3 2014 was not a clean win for our amateur Apple analysts. The pros’ more conservative estimates served them well in the revenue and iPhone columns. The more bullish amateurs did better on gross margin and earnings per share.

A few performances worth noting: