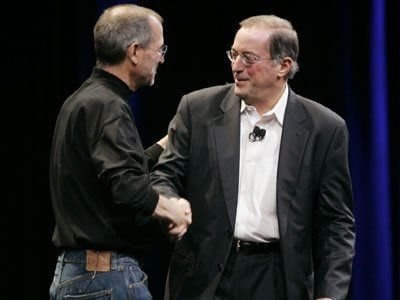 “I went with (former Intel CEO Paul) Otellini to meet with [Steve] Jobs and his lieutenants. We go into this meeting and say Steve, let’s work together to make your Macs better for enterprise customers. Jobs looks at us and says ‘why would I do anything for that orifice called the CIO?’” said Gelsinger. “At Intel we’re aghast; two-thirds of our business is that orifice called the CIO.”

The anecdote, relayed by Jeff Jedras in Computer Dealer News, says a lot about why Apple needs IBM (IBM) to crack the so-called “enterprise market” — those corporate and government IT departments rich and powerful enough to require a chief information officer.

Under Jobs, Apple stayed focused on the far larger consumer market. Unlike the enterprise, where CIOs decide what equipment to buy, purchase decisions in the consumer market are made by the people who actually use the devices — a dynamic that plays into Apple’s strengths in design and ease of use.

In Gelsinger’s anecdote, Jobs goes on to say: “I’m going to build devices that are irresistible for consumers, and CIOs will just have to deal with it.”

That attitude is one of the things that has changed under Tim Cook, whose career before Apple included six months at Compaq and 12 years at IBM.

With Cook at the helm, Apple has worked hard to make its system software more enterprise friendly. At WWDC in June it highlighted a series of new security, productivity and device management features in the language that CIOs speak. (See iOS 8 makes a more powerful business partner.)

When he talks to the press, Cook regularly trots out the percentage of enterprises in which iOS devices are deployed: 98% of the Fortune 500, 92% of the Global 500.

But it wasn’t until Tuesday, in his joint CNBC interview with IBM CEO Ginni Rometty, that Cook added a telling detail: “The penetration [in the enterprise market] is low.”

In other words, nearly every IT department in the world may allow employees to bring their iPads and iPhones — or for that matter Macs — to work, but relatively few enterprises have issued them as standard equipment.

That’s where IBM comes in.

“The big knock on Apple is they were not seen as being serious about the enterprise,” writes Creative Strategies‘ Tim Bajarin. “Now they have a worldwide sales force and support organization to take the iPad and iPhones directly to the [business] customer as well as provide the tools, back end integration, security and support.”

“This,” he adds, “is not good news for the Android crowd.”

It’s not great for Microsoft (MSFT) either.