Steve Jobs to Larry Page: ‘You guys are doing too much’ 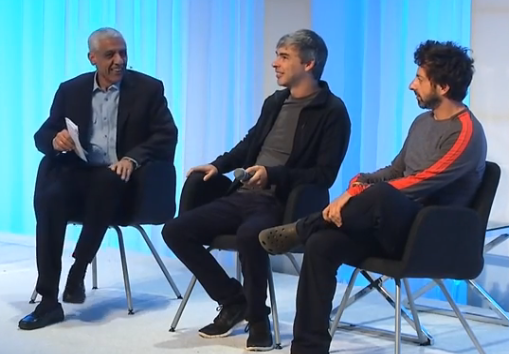 In the “fireside chat” with Google’s (GOOG) co-founders released by Khosla Ventures just before the Fourth of July weekend, Apple (AAPL) comes up only once, at the 25:00 mark.

“My thinking about this has changed quite a bit over the years,” Page begins, before launching into a subtle dig at Apple and his late mentor, Steve Jobs:

I always thought it was kind of stupid if you have this big company, and you can only do, like, five things.

I think it’s also not very good for the employees. Because then you have, like, 30,000 employees and they’re all doing the same thing, which isn’t very exciting. For them.

I would always have this debate, actually, with Steve Jobs. He’d be like, ‘You guys are doing too much stuff.’ And I’d be like, ‘Yeah that’s true.’ And he was right, in some sense.

Page’s answer to Jobs, which he says he’s only come to lately, is that if the company is engaged in activities that are highly interrelated, then there is some limit to the complexity introduced by pursuing a multiplicity of projects at the same time.

“For Google X,” Brin says, “I created a set of rules for our projects that, by design, keep us farther away from Google. For example, we focus on atoms not bits.”

The full interview is highly recommended. At 42 minutes, it’s the perfect length for commute-time listening.

These are two very smart guys with unlimited self-assurance and nearly unlimited resources. In the spirit of the original hacker ethic, they seem to believe they could straighten out all the problems of the world by dint of their intelligence — and the intelligence of their machines — if they could only get their hands on the control box.

See, in particular, the section on machine learning that begins  in the YouTube video at the 12:02 mark.