Android up in China, Germany, Italy and U.S. 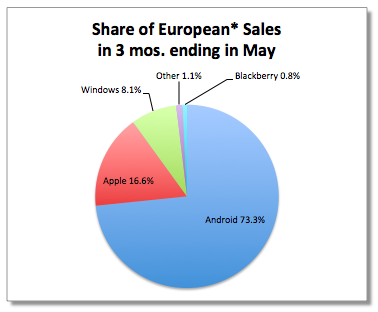 In the smartphone wars, a market share snapshot — like Kantar’s report this week that has Google’s (GOOG) Android with 73.3% of European sales and Apple with 16.6% —  won’t give you the whole picture. It won’t tell you, for example, who’s making and who’s losing money selling those phones or whether the devices are being used in ways that generate revenue for carriers and app developers.

But Kantar’s snapshots illustrate how different these national markets can be. In the spreadsheet I’ve copied below, for example, Apple’s (AAPL) market share in the nine countries Kantar studied ranges from 51.7% in Japan to 6.2% in Spain.

The accompanying press release notes that May was the first full month of sales for Samsung’s Galaxy S5 after its “blockbuster opening” and offers a few findings.

•   Galaxy S5 was the third highest selling smartphone in Britain behind the iPhone 5s and 5c.
•   In the U.S. it was second highest behind the iPhone 5S.
•   Among those who bought the Galaxy S5 across the five largest European markets, 17% switched from an iPhone.
•   Apple loyalty is high in the U.S., with former iPhone owners making up 8% of Galaxy S5 sales.
•   The majority of those switching to Samsung were LG and HTC users.

If the press release seems a little Samsung-centric, that may be because Kantar is an arm of WPP, which has been doing global brand marketing for Samsung since 2004.