Apple’s users spend 4X as much as Google’s 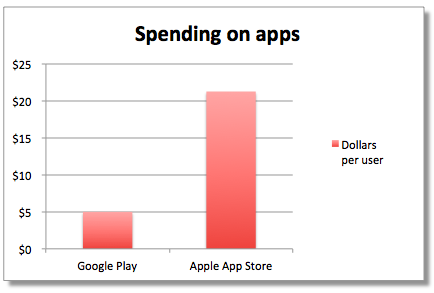 Google (GOOG) likes to play its cards close to its chest, but on Tuesday at its annual I/O developers conference it released two key business numbers — monthly active Android users (1 billion, not counting China and Amazon) and dollars paid to app developers ($5 billion in the past 12 months).

That allowed, for the first time, an officially sanctioned head-to-head comparison between Apple’s (AAPL) App Store and Google Play, confirming what analysts had already guessed: With half as many users (470 million) Apple gets twice the app sales ($10 billion, up from $7 billion in fiscal 2013).

In other words, Apple iOS users are spending more than four dollars for every Android dollar.

Why would this be? In a Wednesday blog post, Andreessen Horowitz’ Benedict Evans suggested five contributing factors: (I quote)

2. Many people in those countries lack credit cards and Google has been very slow to offer carrier billing

3. Android phones average $250-$300 where iPhone average $600 – people who choose to spend the extra money are sending a signal about their intents. That is, we don’t know what the ARPU for a Galaxy S5 user is, but it’s probably very similar to an iPhone user – but Galaxy S5 users are a small minority of Android users

4. Apple offers a distinctly different proposition to Android: perhaps the people who are attracted to that proposition are just more likely to spend money – that is, maybe iPhone users do spend more than GS5 users.

5. Finally, this can become circular: if developers believe that Android users do not pay, then their behavior will be affected – they may offer a free ad-supported app instead of a paid app, or have a lower price. And if they decide not to support Android or support it second, then their users will gravitate to iPhone first, which becomes self-fulfilling. You can see this clearly on Android tablets – magazine apps have low use on Android so are slow to support Android, so users who want magazine apps don’t buy Android tablets.

UPDATE: Touching on the topic in a note to clients Thursday, Cowan’s Timothy Arcuri estimated that Apple’s payments to developers over the past 12 months may have been as high as $11 billion.

“We continue to believe Apple’s latest suite of software and services announced at WWDC bodes well for long-term ecosystem lock-in,” he wrote, “while new programming tools should resonate with developers and help drive longer-term services monetization.”