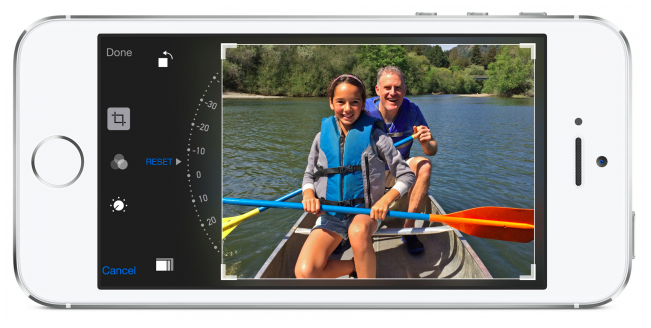 Gathered from around the Web. Some of these improvements made it into Apple’s (AAPL) WWDC keynote last week. Many did not.

— Permanent backup. Every photo and video you take is stored forever in the cloud — for a price. See The great photo shoebox in the sky.
— Exposure control. Slide your finger up and down to set the exposure. See Yahoo Tech.
— Photo editing. Crop, straighten, rotate, adjust light and color in the app. See iClarified.
— Camera timer. Set a 3- or 10-second delay. See PetaPixel.
— Time-lapse video. For making stop-action movies. See Cult of Mac.
— Burst mode. Now available on older iPhones. See Macworld.
— Panorama for iPad. A feature that was missing in iOS 7. See Geekwire.
— PhotoKit. Developers get nondestructive edits, read-and-write access to the Photo library. See Apple press release.
— Credit card scanner. Not really a camera feature per se, but it’s something you’ll be able to do in iOS 8’s version of Safari. See AppleInsider.

Samsung, which uses bigger lenses and is not too proud to have them poke out of the back of a smartphone, still has the edge in pixels and specs. In software, it’s a bit of a features war. Is Apple playing catch up or taking the lead? Your call.

iOS 8 is available now for developers. The rest of us are scheduled to get it this fall as a free update for newer iPhones, iPads and iPod touches. See Apple.