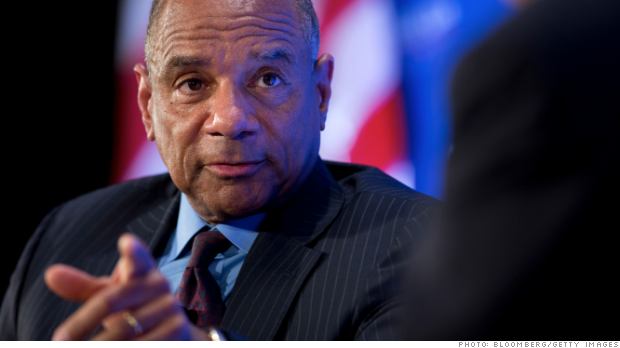 FORTUNE — We are paying for things in new ways; that much is clear. We’re paying for taxi rides using our Uber app, checking out personally tailored offers on Facebook, and downloading films to our Amazon Kindles — without ever pulling the plastic out of our wallets. Yet Ken Chenault plans to insure that American Express (AXP) remains in the center of every transaction.

At the Mobile-First Summit in New York, I sat down with the chief executive to discuss the future of mobile payments. Below is a condensed version of our conversation, edited for clarity.

Fortune: What is the scope of the mobile opportunity for American Express?

Chenault: Mobile is redefining both online and offline commerce. The penetration of m-commerce in e-commerce was around 0.09% [Meaning that less than one percent of e-commerce transactions happened on mobile devices –Ed.]. By 2017, it’s projected to be at 26% and that’s just penetration in e-commerce.

That’s just e-commerce. When will we stop breaking it out and talk simply about commerce?

What’s happening is a gigantic opportunity. Mobile will redefine how commerce is done. Steve Jobs redefined the retail experience. I think commerce and mobile will do an even more transformational job in an exponential way. The opportunity for startups to redefine the power of mobile is incredible. Scale is important, but if you have the idea, you now have the ability to connect with companies that can drive that scale. Clearly there are five platforms that will play an important role and be very powerful: Amazon (AAZN), Apple (AAPL), Google (GOOG), Facebook (FB), and Alibaba. More and more, startups will be able to connect to these services to scale quickly.

How does the competitive landscape change?

I think it’s important to understand the payments industry and commerce is going through fundamental change. You are seeing a blurring of commerce, mobile, payments, and a convergence of online and offline. In the near term, plastic is not going to go away. You are going to see a demarcation between payment companies. There are going to be those that stay in the status quo, and they’re going to focus on facilitating payments. That is a mistake. They will be reduced to a commodity. There will be those companies who will focus on the entire commerce journey, and that’s us.

I’ll give you one example of how payments has changed: Uber has changed payments. Infrastructure hasn’t changed at all, but the experience is frictionless and seamless, and you don’t even know you’re consummating a payment.

We have the largest integrated global payments platform. We bring together users, card members, and merchants, and the data is incredibly valuable. We know where they spend online and offline. We want to deliver benefits and services when our card members want it, where, and how they want it.

Let’s talk about Uber. I use it, and just noticed this morning that when I pulled up Google Maps to get directions to this venue, the app offered me the option to call Uber. As a consumer, I was dealing with the Google brand and the Uber brand. Yes, I made the payment on my American Express card, which is linked to my Uber account, but the AmEx brand didn’t come into my line of sight. Is that a good or a bad thing for AmEx?

So you’re talking about the difference between the transaction and what you call “the journey.” What’s involved in that journey?

Here’s what’s key. If we look at how mobile devices are used, people who use mobile devices in the shoppers’ journey are 40% more likely to convert to sales. Think about how people use information, how they leverage recommendations they get from social media sites. The key is to understand the different elements of the commerce journey. We want to be where our customers are. We want to deliver them benefits in the way they want to have those benefits presented to them. It goes back to a key message I give in my organization: This is an environment where you innovate or die. We want to be the company that will put us out of business.

Part of that is looking beyond the trends to understand systematic change. Were digital wallets a fad? In 2011, companies like Google and Square launched them. In 2014, many of those efforts haven’t worked and are being retried. Are digital wallets dead?

I don’t think they’re dead, but if you go back to what I said publicly in 2011, I didn’t think these wallets met a value proposition. I’m going to tap to pay? What’s the friction that it’s really solving? What are the benefits that I’m getting? How is that helping me in my shopping journey? At the end of the day, the failure of wallets was not being focused enough on customer needs.

But you think some efforts have worked?

We acquired a platform called Revolution Money in 2009 at the height of the financial crisis. It is a very flexible alternative payments platform. We said, There’s a large population of folks not being served — there are 70 million people in this country who don’t have a checking account or don’t believe they’re being served well. NerdWallet has said with prepaid cards, you’re paying $300 a year to use your own money. With checking accounts, people are paying several hundred dollars a year if they don’t have a minimum balance. So we came out with an online payment platform that works offline and online. In early 2014, once we got the platform stabilized, we brought on 2.4 million customers. In the month of April alone, we brought on 1 million customers. They’re transacting volumes on our platform. Wallets, if they are done right, can work. Mobile apps will play an important role going forward.

We made further changes to the functionality of the platform so you can do anything you want — pay bills, do peer-to-peer-payments, write checks. The term we coined in our company is that it is expensive to be poor. But we can develop a model where we have attractive economics, so instead of paying $14.95 a month for a prepaid card, you pay $1 a month with us for a far better service.

Peer-to-peer payments: How important is the capability?

It’s very important, but what’s critical is that you have got to connect peer-to-peer payments with a range of services that meet a variety of needs. As a standalone, it’s difficult to generate the economics you need. But there’s a very high demand. We looked at where spending takes place. Outside of credit cards and charge cards, there’s $25 trillion out there. That’s a tremendous opportunity.

You’ve done creative things with the AmEx loyalty program like recently making it possible for people to pay for a New York City cab ride with points. Are people actually using this service?

Yes! It is frictionless, and once people use it, 80% of the them return.

(Audience member: “I’m worried it’s a bad deal, that the points can be used better elsewhere.”)

Here’s what you’re missing. Do you want to only use those points for airlines? People have said, “I want choice and convenience.” If you just say for every dollar there’s one point, people want a wide variety of choices.