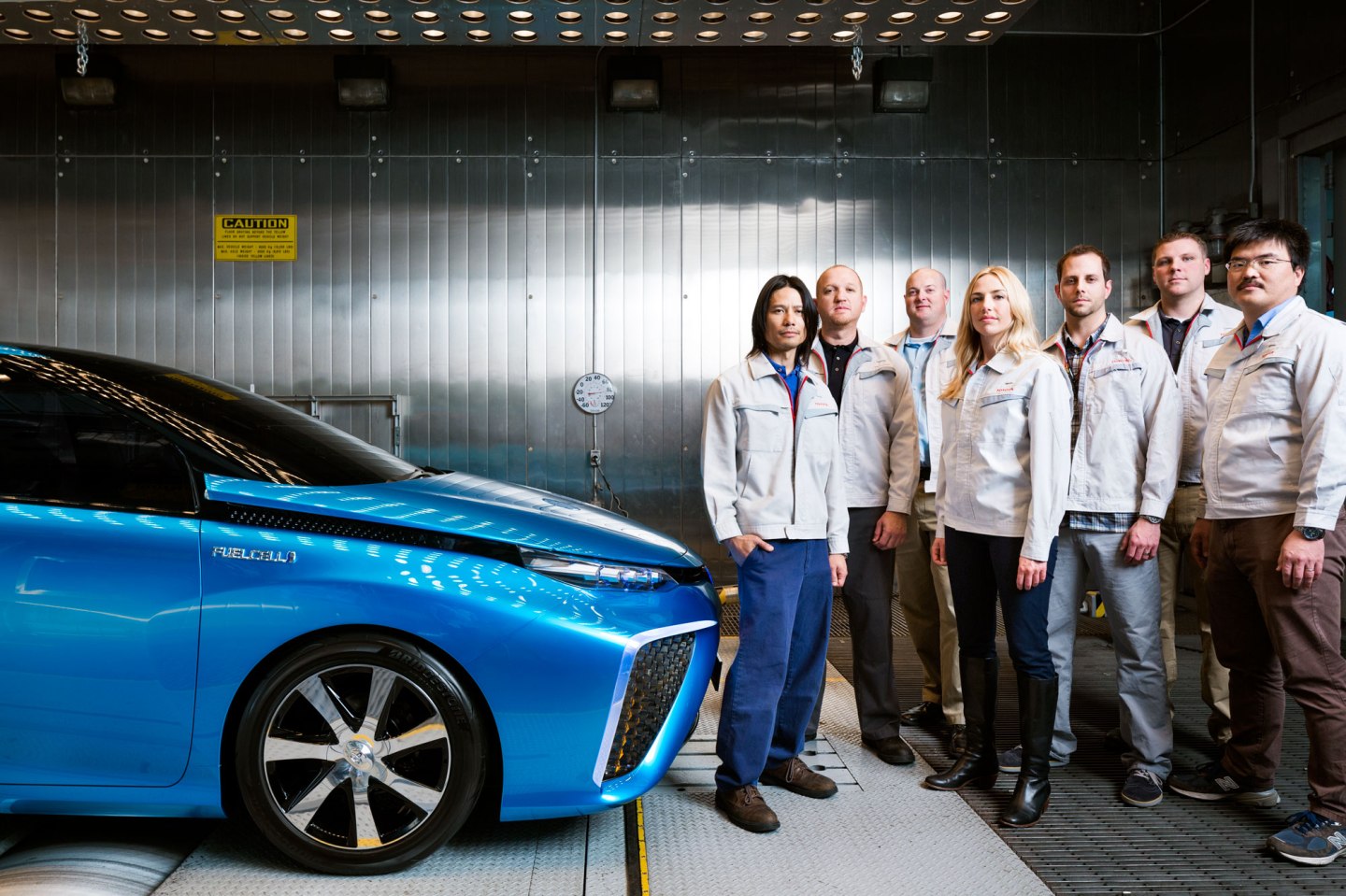 Business is a team sport. While history textbooks—and business magazines—tend to lionize individual leaders from Henry Ford to Steve Jobs, there would be no Ford Motor or Apple without groups of employees working together to design, manufacture, market, and sell their products. Fortune set out to highlight successful teams and quickly discovered that there’s no single formula for making them work.

We found highly effective groups consisting of people who’d worked together for years and productive “virtual” teams that span multiple time zones and companies. Some teams vacation together to strengthen their bonds, others encourage dissent—but all in the name of getting results. Still, there are some universal lessons to be gleaned: Chemistry matters. So does having a common goal. And while there’s no one way to build strong teams, you can’t build a successful company without them.

To test its new tech, the fuel-cell group went road-tripping.

Over the past three years, members of the fuel-cell vehicle group have logged more than 1 million test miles in certifying Toyota's first-ever production fuel-cell car: a zero-emission, electric drive, four-door sedan that can travel 300 miles and be refueled in three minutes. On trips lasting weeks at a time, the nine-member group, based in Torrance, Calif., has taken the car from Yellowknife, Canada, to Death Valley, Calif., with stops in between in Las Vegas, San Francisco, and the Rockies.

Using classic automotive test protocol, the team installed the fuel-cell components in nondescript older cars known as engineering mules and traveled caravan-style with support vehicles. Three technicians handled the driving (technicians are renowned at Toyota for their ability to calibrate suspensions with their posteriors) while four engineers monitored the powertrain.

Due to be introduced in the U.S. next year, the car, which as yet has no official name, will initially be sold in California with a subsequent rollout to the Northeast, and Toyota (TM), optimistically, has already boosted its production targets.

The carmaker has been working on fuel cells since 1992 and now believes they have greater potential for development than similar battery-powered cars. Powertrain costs have been reduced 95% over the past 10 years, partly by including the use of parts already developed for Toyota hybrids. Packaging the bulky components has been significantly streamlined. Team leader Matt McClory says the fuel-cell car has already passed one key test: In the bitter -30° cold at Yellowknife, a conventional gas-powered rental car being used as a support vehicle failed to start after a cold night. The fuel-cell car fired up flawlessly. —Alex Taylor III

Execs who play (and stay) together

The folks who built hot grocer Whole Foods actually like one another. A lot.

Whole Foods' "e-team" of seven top executives possesses a closeness and trust seldom found in big corporations that keep the C-suite strictly professional. Co-CEO John Mackey has been friends with executive vice president Jim Sud for 47 years, dating back to when they were Houston teenagers, going on double dates together. (Sud's $5,000 investment helped the company get started.) Chief financial officer Glenda Flanagan joined in 1988, when Whole Foods (WFM) had just six stores. She and Mackey live in the same Austin neighborhood and often go on morning walks together. Though they're scattered in offices in California, Massachusetts, Maryland, and Texas, the seven executives try to spend time together outside the office. President A.C. Gallo once toured Croatian villages with Flanagan and Mackey. This spring the entire executive team will head to the Virgin Islands for a beach vacation. "We just like hanging out together," says Mackey. How does this translate into good business? Mackey says their high degree of trust means better communication and a willingness to work things out when problems and disagreements arise. With 33 to 38 new stores opening this year and revenue expected to climb 11% to 12% this year, it is hard to argue with his approach. (For more, see "Whole Foods takes over America.") —Jennifer Alsever

A brother-sister startup team cleans up with high-profile backers.

The era when startup teams would toil together in obscurity for years before launching a product or seeking funding is long gone. In 2010, Homejoy founders and siblings Adora and Aaron Cheung, now 30 and 25, respectively, brought a startup idea to mentoring program Y Combinator. It didn't work, but they left the incubator with enough seed funding to try different ideas. When their software-driven housecleaning business plan caught on in 2012, Andreessen Horowitz led a $1.7 million investment; just seven months later Redpoint Ventures, along with Google Ventures, injected $38 million. Because of its high-profile backers, Homejoy has been able to assemble a dream team of seasoned vets, such as finance director Deborah Lightfoot, who had the same gig at gaming giant Electronic Arts. —Jessi Hempel

How IBM corralled an unwieldy team

Surprise! an old-school organizational technique (not software) saved the day.

IBM is one of the most technologically advanced companies in the world, but when one of its executives needed to organize a sprawling team of more than 200 of the brightest scientists at eight different IBM (IBM) labs, two government laboratories, and five university campuses with diverse areas of expertise, he turned to a book written in 1985.

IBM Fellow and chief scientist Dharmendra Modha, charged with overseeing an ambitious government-funded project to develop a chip that would mimic the human brain, used a method called six thinking hats, described in a book of the same name by inventor Edward de Bono. He told the team members, who struggled to find consensus in their email and digital communications, to characterize with colors their arguments: white for facts, black for discernment, red for emotions, green for investigating an idea, and yellow for optimism. The idea: Drive objectivity by separating fact from emotion.

Modha says the method worked to encourage quieter participants with good ideas to speak up and allowed everyone to reconcile diversity of thought. To ensure a common direction, Modha created a contract, outlining the technical specs of what each party would build. It eliminated the ambiguity of whether a key piece of technology would fit with the work done by others. "It kept us working in complete synchronization," says Modha.

When groups differed on the best way to tackle a particular technical challenge, he split people into two groups. Each group pursued their approach and measured the results objectively at the end of a set period. The idea: Ensure that failure was never a mark against anyone's reputation but rather a learning experience for everyone.

In 2011, Modha's team successfully demonstrated a brain-inspired chip architecture, and the project continues to develop technology that helps computers think more like humans. No word yet on whether the computers divide their arguments by color. —J.A.

A restaurant's team of rivals

Noodles & Co. uses conflict to spice up the C-suite.

The two were opposite in personality, skill, and style. Kinsey, a former accountant, is predictable; he eats the same lunch every day. He's also pragmatic, grounding every idea in financial and logistical reality. Fogarty, meanwhile, grew up in advertising. For him, no idea is too crazy. He loathes routine and seeks out variety, whether it's in fine dining, Scotch, or travel. Not surprisingly, Reddy had to referee many heated debates between his lieutenants, who ultimately achieved détente on a road trip visiting the company's restaurants. "It was kind of like couples therapy," says Fogarty. "Now we understand the common goal."

Reddy believes that executives who challenge one another—rather than validating each others' ideas—produce the best thinking. "I don't mind if it gets a little bloody as long as it's merely a flesh wound," he jokes. Given Noodles & Co.'s performance—same-store sales have grown in 31 of the past 32 quarters—Reddy can accept the squabbling. —J.A.

The Thompsons of the University at Albany are so in sync they don't need words to communicate.

Some teammates meet or practice so frequently that they develop a sort of magical rapport. University at Albany lacrosse stars Miles, Lyle, and Ty Thompson take this transcendent rhythm to another level. "They almost don't even have to communicate sometimes—they can make things happen by a head nod or a stick fake or just a shoulder shrug that tips the other guy, and they're able to find each other," says Albany men's lacrosse head coach Scott Marr. "This is stuff you can't get from normal practice."

It may help that the Thompsons are family. Miles, a senior, and Lyle, a junior, are brothers; Ty, a senior, is their cousin. (The brothers are members of the Onondaga tribe, while Ty is Mohawk. They grew up on Native American reservations in upstate New York; all three are "attack," or strictly offense, players.) Miles traces their on-field chemistry to playing box lacrosse, an indoor version of the sport, together since they were children. "Growing up, playing with each other, it carries out on the field really well because we know each other's tendencies and know each other's strengths," says Miles. Ty adds, "Our lacrosse IQ is so high because we've been playing since we could walk."

So how to compete against the Thompsons, or any set of teammates that exhibits a similar brand of innate collaboration? Rivals have responded by double-teaming Lyle and Miles or trying to deny them the ball—with some success. (Albany's record is 5-5; last year it finished 13-5.) But even when Albany loses, the Thompsons' play is thrilling—"a thing of beauty," Marr notes. Sometimes the best way to deal with a transcendent team is simply to watch and learn. —Daniel Roberts