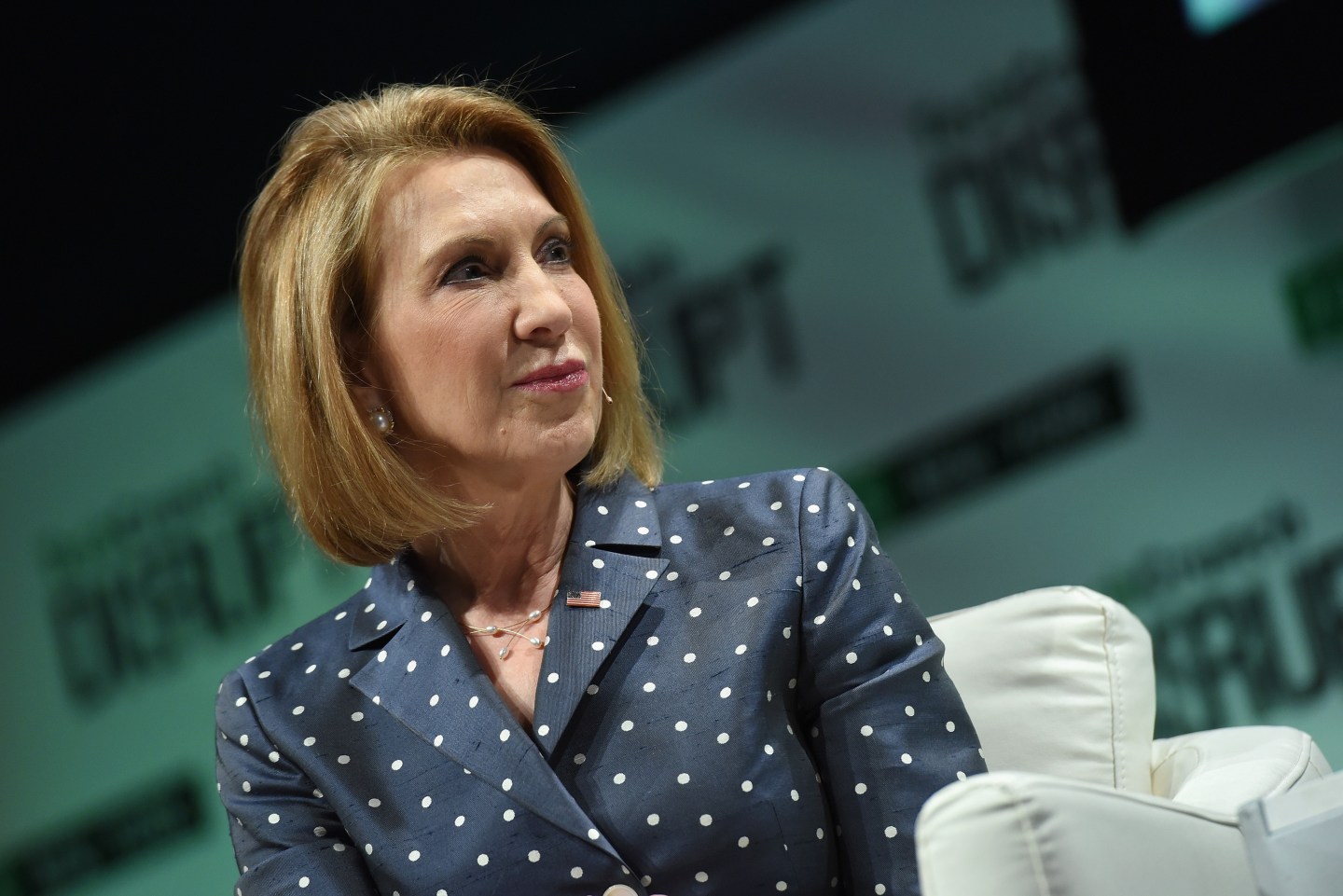 In the spring of 1999, Lucent Technology’s star executive Carly Fiorina pulled off yet another coup—or so it appeared. A tiny start-up called PathNet agreed to buy huge amounts of fiber-optic gear from Lucent, a deal worth at least $440 million and potentially as much as $2.1 billion. The agreement Fiorina negotiated “potentially represents the single largest fiber supply agreement to a network operator in the U.S,” according to a triumphant press release.

While it was unclear how a tiny company like PathNet, with barely 100 employees and all of $1.6 million in annual revenue, could swing such as massive purchase, Wall Street didn’t seem to care about such details. The day following the announcement Lucent’s stock jumped 3%.

As she tells it on the campaign trail, Fiorina’s life story is an inspiring tale full of such achievements. From an unlikely start as a secretary she raced up the corporate ladder to record heights, becoming the first female to run a Fortune 20 company, Hewlett Packard (HPQ). Now, after battling cancer, she’s running to oust Barbara Boxer (D., Calif) from the U.S. Senate.

Yet Fiorina’s campaign biography quickly skates over the stint that made her a star: her three-year run as a top executive at Lucent Technologies. That seems puzzling, since unlike her decidedly mixed record at HP, Fiorina’s tenure at Lucent has all the outward trappings of success.

Lucent reported a stream of great results beginning in 1996, after Fiorina, who had been a vice-president at AT&T (T), helped oversee the company’s spin-off from Ma Bell. By the time she left to run HP in 1999 revenues were up 58%, to $38 billion. Net income went from a small loss to $4.8 billion profit. Giddy investors bid up Lucent’s stock 10-fold. And unlike HP, where Fiorina instituted large layoffs—a fact Senator Boxer loves to mention whenever possible—Lucent added 22,000 jobs during Fiorina’s tenure.

Dig under the surface, however, and the story grows more complicated and less flattering. The Lucent that Fiorina walked away from, taking with her $65 million in performance-linked pay, was not at all what it appeared. Nor were several of her division’s biggest sales, including the giant PathNet deal.

The Lucent-Fiorina story starts in 1995, when AT&T began to consider selling one of its crown jewels, its equipment-making division. The group had $21 billion in annual revenue and housed the famed Bell Labs, birthplace of the transistor and corporate America’s preeminent research outfit.

Spinning off the equipment group into a separate company had instant appeal. As a separate company, Lucent could sell gear to AT&T’s competitors on an even footing with Nortel, Cisco (CSCO) and others. The timing was also perfect. In the late 1990s companies like Worldcom, Qwest (Q) and Global Crossing were laying fiber optic cables around the country and the world. Start-ups like Winstar were spending billions on new-fangled wireless networks. Dozens of small companies including PathNet came up with designs for other types of telecom networks.

In 1997 Fiorina took over the group selling gear to such “service provider networks.” The company reported that sales to such networks climbed from $15.7 billion in fiscal 1997 to $19.1 billion in 1998. In 1999 they hit an amazing $23.6 billion. In the midst of this rise Fortune named Fiorina — then largely anonymous outside of telecom — to the top of its first list of the country’s most powerful women in business. A star was born.

As Wall Street became fixated on equipment companies’ growth, the whole industry entered a manic phase. With capital easy to come by, Qwest, Worldcom and their peers laid more fiber and installed far more capacity than customers needed. Much like the housing bubble that was just beginning to inflate, easy credit fed the telecom bubble.

Lucent and its major competitors all started goosing sales by lending money to their customers. In a neat bit of accounting magic, money from the loans began to appear on Lucent’s income statement as new revenue while the dicey debt got stashed on its balance sheet as an allegedly solid asset. It was nothing of the sort. Lucent said in its SEC filings that it had little choice to play the so-called vendor financing game, because all its competitors were too.

In the giant PathNet deal that Fiorina oversaw, Lucent agreed to fund more than 100% of the company’s equipment purchases, meaning the small company would get both Lucent gear at no money down and extra cash to boot. Yet how could such a loan to PathNet make sense for Lucent, even based on the world as it appeared in the heady days of 1999? The smaller company had barely $100 million in equity (and that’s based on generous accounting assumptions) on top of which it had already balanced $350 million in junk bonds paying 12.25% interest. Adding $440 million in loans from Lucent to this already debt-heavy capital structure would jack the company’s leverage up to 8 to 1, and potentially even higher as they drew more of the loan.

Fiorina says in her autobiography that she pushed back against the pressure for short-term growth at any cost, and two former Lucent collegues with whom she remains friendly back her up. On the other hand, this 2001 Fortune story, which described Lucent’s irresponsible growth habits, cites sources saying Fiorina made it known that Wall Street would generously reward companies that emphasized and delivered robust revenue growth. And an executive who sat across the table from Fiorina in a big vendor financing negotiation, when asked this week about what he remembers of the bargaining, described Fiorina as being dead set on chalking up a huge sale. He adds: “The press release was always very important to her.”

Whatever the exact extent of Fiorina’s role, Lucent was soon sucked in deep, making big loans to sketchy customers. In an SEC document filed just after Fiorina’s departure, the company revealed that it had $7 billion in loan commitments to customers — many of them financially unstable start-ups building all manner of new networks — of which Lucent had dispensed $1.6 billion.

Such vendor financing deals would have much the same impact on the telecom industry that sub-prime mortgages eventually had on the housing industry. In both cases public companies extended loans to customers who were gambling that the good times would keep rolling (and who were especially glad to make those bets with the lenders’ money). In both cases the loans helped puff up lenders’ short-term financial results and stock prices. In both cases the market inevitably turned and the pile of debt collapsed. (PathNet, after taking on another slug of vendor debt from Nortel, filed for bankruptcy protection in 2001 as the industry collapsed.)

Fiorina’s campaign calls comparisons of the vendor financing deals she worked on to subprime lending “disingenuous” and “almost libelous.” Adds spokeswoman Andrea Saul: “Over the past decades, Carly established herself as a successful business leader who knows how to create jobs and growth with Barbara Boxer herself praising Carly for her success in the business world and at Lucent specifically.”

Regardless, once Fiorina left for HP in July, 1999, Lucent’s dicey debt and other worries became someone else’s problem. Fortunately for her, based on Lucent’s sky-high stock price, Fiorina’s stock and options were still worth a mint. (A total of $85 million, she says.) HP gave her $65 million worth of restricted stock to compensate her for the Lucent stock and options she was leaving behind.

Fiorina likes to point out that she left $20 million on the table. Of course, that’s using her numbers and assuming she would have cashed out her Lucent stock and options at once. If she had held onto the stock and options instead of selling them, that $85 million would have evaporated.

That’s what happened to most Lucent investors. Soon after Fiorina left, the company began to collapse. Eventually its shares crashed to less than $1 and in 2006 the company merged with Alcatel (ALU).

Much of the decline in Lucent’s stock price was inevitable—a mania for all telecom investments in the late 1990s raised shares in every big telecom equipment maker to irrational heights. Yet it’s hard to shake the feeling that the company’s wild pursuit of growth gave it much further to fall.