For FedEx, it was time to deliver 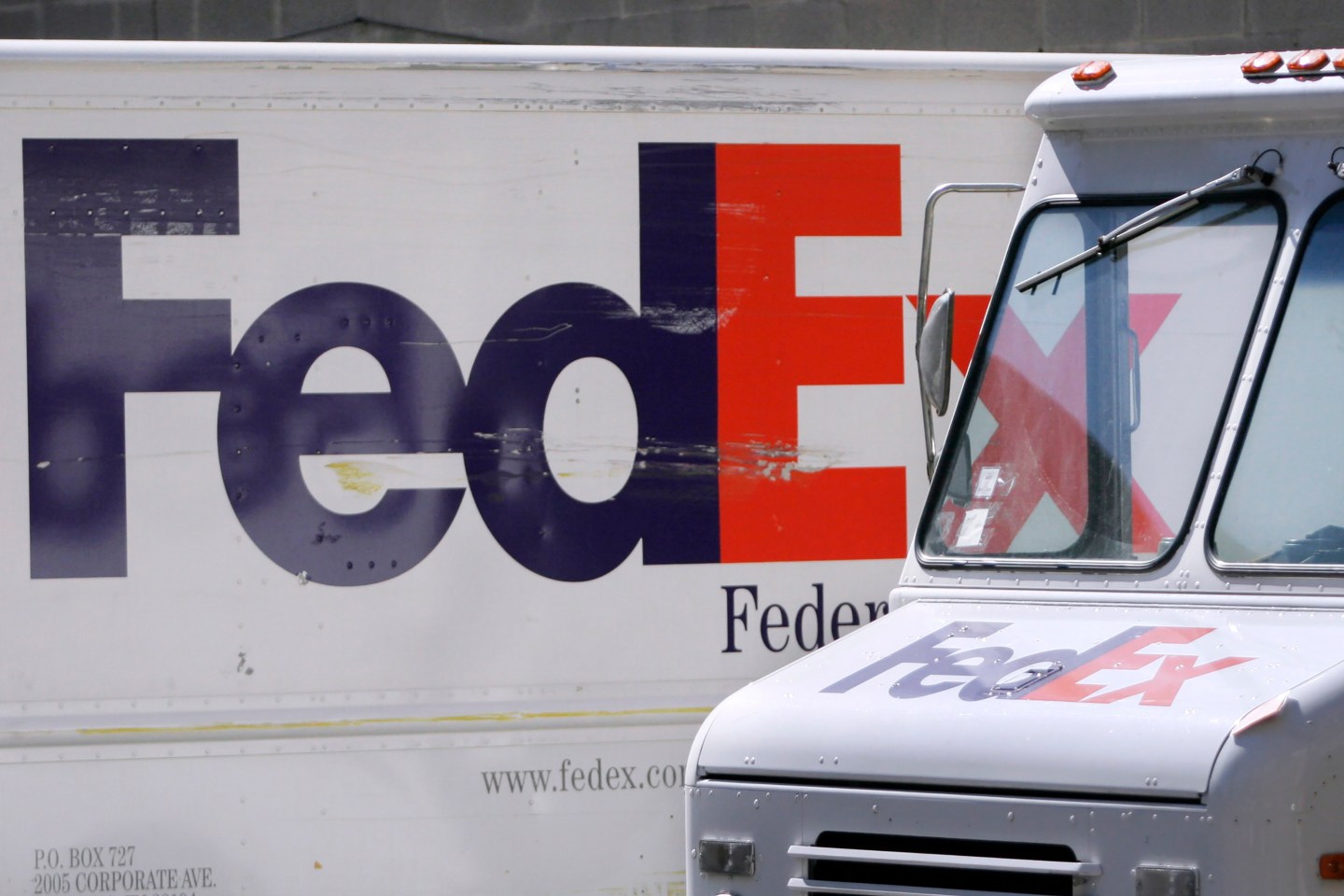 UNITED STATES - SEPTEMBER 21: FedEx delivery trucks are parked at their world service center in New York on Tuesday, September 21, 2005. FedEx Corp., the No. 2 U.S. package shipping company, said first-quarter profit rose and earnings for the full year will be higher than forecast because of growing exports from Asia and an expanding economy. (Photo by Andrew Harrer/Bloomberg via Getty Images)
Andrew Harrer—Bloomberg/Getty Images

Watching TV in Memphis, Mike Mitchell didn’t get it. Day after day, the FedEx Express senior technical advisor heard reporters describe how desperately New Orleans rescuers needed communications. Nobody seemed able to fix the problem. Finally, on the Thursday after Katrina hit, Mitchell spied a way to help: an aerial shot of a 54-story building near the convention center showed the intact base for a FedEx radio antenna, part of a system he had visited in 2004 on a maintenance check. That led him to hope that part of the installation had survived. We have spare parts here in Memphis, he thought. If we could just get a generator to the roof and radios to the rescuers, they’d have a way of talking to one another. Mitchell shot an e-mail to his boss the next day. It made its way up the ranks. FedEx called FEMA. FEMA called the 82nd Airborne Division. They all liked the idea.

Five days later Mitchell arrived in New Orleans with 125 walkie-talkies, a few changes of clothes, and a sleeping bag. He didn’t know how he’d get to the top of the building or exactly what he’d find there. But he was determined to make the radios work. “I didn’t want to let all those people down,” he says. There turned out to be just enough fuel in the building’s emergency generator for a couple of elevator rides to the top. An Army helicopter dropped in a half-ton of gear, including a nine-foot antenna to replace the one Katrina had sheared off. With help from eight soldiers, Mitchell fixed it. “Radio check,” he called into a walkie-talkie after they had finished. “Lima Charlie,” a soldier shot back. (Translation: loud and clear.) Thanks to FedEx, members of the 82nd and other rescuers finally had a reliable radio net.

Impressive as Mitchell’s radio rescue was, such dramas are almost routine for FedEx. “That’s the nature of our business,” says Dave Bronczek, who heads FedEx’s Express division. “We’re used to dealing with crisis.” At any given moment, somewhere in the world there is a social upheaval, a dangerous storm, a wildcat strike. FedEx, which earns its money by being dependable, can’t afford a wait-and-see attitude; it moves in advance.

Emergency central at the company is a big, dimly lit room on the fourth floor of its new Global Operations Control in Memphis. John Dunavant is the GOC’s chief; it’s his job to make sure the hundreds of planes and thousands of trucks arrive when they’re supposed to, and to have a sure-fire backup plan when they don’t. A large screen at the front of the room shows the position, origin, and destination of every aircraft FedEx currently has in the sky. It is 15:54 Greenwich Mean Time on a recent Friday, and exactly 80 planes are in the air. Ten seconds later there are 79. One has just landed.

Every day of the year FedEx must cope with some sort of local disruption. In 2004 the company had to activate contingency plans on 37 tropical storms. This year that number stands at 30 and counting. Add to that such events as an air-traffic-controller strike in France this March and a blackout in Los Angeles in September, and it’s no wonder that FedEx gets so much practice in flexibility. What’s more, FedEx conducts diaster drills several times a year–for everything from big earthquakes to bioterrorism to a monster typhoon hitting the company’s hub in the Philippines. Eight disaster kits, each containing two tons of such supplies as fuel and communications gear, stand ready in Memphis in case a facility is in need of repair. Each night, five empty FedEx flights roam the skies, standing by to replace a broken-down plane or assist with an unexpected surge in volume.

All this, of course, makes FedEx a national resource during a crisis like Katrina. Before the storm hit, FedEx positioned 30,000 bags of ice, 30,000 gallons of water, and 85 home generators outside Baton Rouge and Tallahassee so that it could move in quickly after the storm to relieve employees. Also dispatched in advance were four of those 4,000-pound facility repair kits.

FedEx also made preparations on behalf of the Red Cross, which keeps shipping containers filled with bandages, blankets, batteries, and such at FedEx hubs to be dispatched around the globe at a moment’s notice. Before Katrina, FedEx staged 60 tons of Red Cross provisions (it has since delivered another 440 tons of relief supplies, mostly at no charge). FedEx Kinko’s, the company’s newest division, staged Canon and Xerox copiers, 700 cases of paper, and 300 bottles of toner in Covington and Baton Rouge so that FEMA and the Red Cross would have the office supplies they would need. “Kinko’s had always been reactive,” says division chief Gary Kusin. “[At FedEx] I got to see how the big boys do it.”

Though FedEx was ready for Katrina’s high winds, the subsequent flooding and chaos took the company by surprise. “In no way did we envision what was going to happen. We’re not Nostradamus,” says Dunavant. The local authorities blocked access to entire zip codes; FedEx returned some 10,000 packages to their senders, and to head off new shipments to the closed zones, CIO Rob Carter’s IT team rushed to reprogram more than 100,000 devices. Since the New Orleans airport was also closed, FedEx shifted its area hub to Lafayette, La., 135 miles away–a process that normally takes six months. Before Katrina, Lafayette would see a single FedEx turboprop carrying packages each day. Now three 727 jets unload there. RVs lined up in a gravel parking lot house employees who have come in from other areas to keep operations humming.

In no way did we envision what was going to happen. We’re not Nostradamus.

Like Andrew before her, Katrina has taught FedEx a thing or two about disaster preparation. Lesson No. 1: Arrange for temporary housing in advance for employees who might get displaced. Lesson No. 2: Don’t count on cellphones. The local networks were down for days after the storm; the company is increasing the number of satellite phones it deploys.

In the center of the operations room is a 30-foot-long table with 12 microphones clustered toward the middle. That’s where Dunavant sits. Since Aug. 24, five days before Katrina struck the Gulf, he has conducted a twice-daily conference call for more than 100 people. The Sept. 9 call is the last of the Katrina crisis. “Good morning,” he says. “It’s 10 o’clock in Memphis. Let’s get started.” For the next 45 minutes he speaks calmly and swiftly. There are three major items on the agenda: making sure roads are passable for delivery trucks to revive service in Covington, La.; finding out where computer connectivity stands in Lafayette and Biloxi; and getting an update on the status of employees in the area and the relief supplies they still need. Dunavant makes sure everyone is clear on what he expects of them. Then he wraps up. “Thanks for your hard work,” he concludes. “Hopefully, we won’t talk to you for a while.” But this same morning a FedEx meteorologist has already come by to brief the staff on a storm named Ophelia.

A version of this article appears in the Oct. 3, 2005 issue of Fortune.